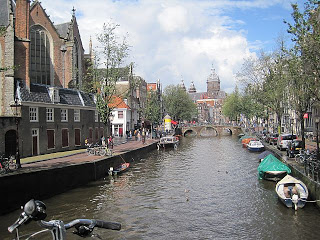 After our boating trip we spent a long weekend in Amsterdam. There are gazillions of must-sees and you can’t possibly see them all. We narrowed it down to the things that make Holland unique.

Our pick was a canal cruise, the Cannabis College and the Marijuana Museum.

Were they all that? It was interesting to learn just how many uses cannabis has, apart from getting stoned, and they showed us some of the different ways it can be taken. Same with the sex museums. People are turned on by really strange stuff and you get to see it. Not for the prudish. You are warned before you go into a room where there is graphic and disturbing material. But they mainly have exibits of erotica going back eons and from all civilisations.

What it is really wierd though, is to walk the streets and smell the aroma of weed coming from the various coffee shops. My head knows that it’s an illegal substance, so it’s quite a head twist watching people smoking in public without fear of breaking the law. The distinct smell of cannabis pervades the city.

Add that to the constant clanging of the trams moving swiftly past and you could close your eyes and know you are in Amsterdam.

We walked about and took in as many of the recommended sights and areas.

We also enjoyed just being in the city and strolling the streets observing the goings on. If we passed a cheese tasting shop, then we would pop in, or have a coffee at a cafe and watch the world go by. Our obsevations were that the biggest customers of the coffee shops and the ladies in the red light district are NOT Dutch.

We found markets all over Holland. They seem to be in different towns on different days. The food stalls allow tastings and put out morsels for you to try. Be warned – you will end up buying – and eating – a lot of food. We consumed our body weight in cheeses, cookies and Belgian beers.

My favourites were Speculaas cookies and Dutch apple pie. The beers are served in brandy style glasses with the name of the beer on the glass at local watering holes. Our favourite beers were Leffe and Grimsberg. These two have a sweeter, almost nutty flavour and aren’t fizzy like most lagers. One warning – they pack nearly double the alcohol content of other beers.

We tried a cheese and apple pancake at one of the pancake bars. Not a combo I would have thought of, I have to say, but nice all the same. Dutch liquorice is highly addictive. I managed to wolf down a half kilo bag in two days. It comes sweet, mint, honey or salty. I got a mixed variety bag and I can report – they are all good.

Since I don’t eat meat, the best value for money, and the best food for vegetarians, came from Maoz. They let you go back to the salad bar as much as you want to top up.

We had fun looking out for quirky boat names and even quirkier cyclists. There really, really are a lot of bicycles in Holland. I was surprised to learn they have right of way on roads. They also don’t wear helmets. Kids grow up riding bicycles so riding a bicycle is like breathing to the Dutch.

They manage to do all sorts of things whilst cycling. Like; chat on a phone, apply lipstick, carry babies on their backs, hold an umbrella. Pedalling in the highest of heels doesn’t seem to present a problem.

You have to keep your wits about you crossing a road as bicycles hurtle past in all directions. Amsterdam is not a pedestrian friendly city.

The Dutch tourism offices do not have an “i” sign, but rather a triangle shaped VVV board. It stands for Voor Vremdelingen Verkeer and is pronounced “fear, fear, fear”. The VVV offices are not always free standing. They pop up in museums and even in a sports shop in one town.

Many shops close on Mondays for some reason in Holland. Even in Amsterdam. Once we realised this we made sure we did our visits and shopping between Tuesdays to Saturdays.

Here are a couple of handy links for visiting Holland –

For accommodation we used Housetrip and bagged ourselves an fully furnished apartment right in the central city area. You could also try Wimdu or Airbnb.

The wonderful thing about the open, warm Dutch personalities is you can ask them for directions without fear of offending them. You are likely to be rewarded with enthusiatic help and friendly conversation.

It’s a great city and a lot more than just sex and drugs. Just rememmber to pack a rain proof jacket. It rained every day we were in Holland. Especially in Amsterdam. In Amsterdam, it must have rained ten times a day. 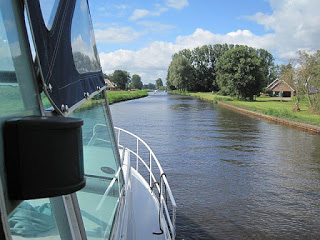 I am going to dispense a little bit of advice to wannabe boaters. Not that I am an expert, but I have done a few boat trips now.

1. One week is never enough. You hardly get going, and before you know it, you have to return the boat. You also lose a day as you don’t get seven full days and nights. A fortnight is best.

2. Most canals boat holidays don’t require boating experience but it does help. Manoeuvring a boat in tides and wind is not easily done. For a sailing holiday, consider doing a boating course. You can do a 6 – 8 week competent crew course which will give you the basics.

3. For the person handling the boat, you need to know that a boat doesn’t drive like a car. Rather go slowly and get a feel for the wind and the currents and work with them to move the boat. We have seen people with no clue heading off full throttle and bashing boats. Less is more with a boat.

4. Rather plan a shorter distance and enjoy the trip than travel further and have to travel at speed to return the boat in time.

5. Try to travel in a loop, rather than there-and-back, to vary the scenery.

6. You need to be aware that boating usually is done in the countryside and you can’t always pop into a 24 hour superstore or pharmacy on a whim.

7. Boats are compact. Space is limited. Pack as little as you can get away with.

8. The perception that boating is elegant and luxurious is a complete myth. You will have much less water than you are used to. You will bump your head and shins moving about in the cabin. Don’t even think about wearing heels.

9. Boat loos take some getting used to. They don’t have regular flush systems. 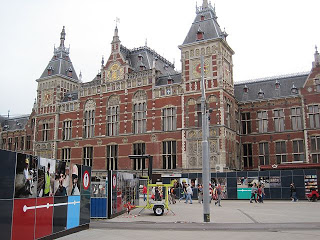 On the KLM airplane to Holland, the first thing I noticed was how jovial the Dutch passengers were. The people in the row in front were leaning over their seats, chatting to the people next to me and laughing. A lot. I remembered the exuberance of the Dutch supporters during the 2010 Soccer World Cup. Cape Town turned bright orange during the Holland games. A massive party, including an orange double-decker bus, had travelled down to South Africa to follow their team. The Dutch are without doubt, a happy, hearty, friendly nation.

Our first night was spent at Ibis Hotel in Stopera which was a 30 minute walk away. We could have taken a bus but after a day of sitting on planes and buses we were happy to walk. The hotel is fairly central and our room looked out onto a canal. The Ibis/Accor group are often our hotel of choice as they are well priced and it’s easy to book in advance. Breakfast is optional with Ibis hotels. Ibis Hotel.

Internet is usually free in the lobby. If you can get a chance to use it. Check prices before hook up to the net in your room. You may be in for a shock.
IBIS tend to do a local style breakfast so it varies from hotel to hotel. A Dutch breakfast would have been €15.00 each. We decided to take to the streets and find our own breakfast. The receptionist guided us to a quaint spot called Bagel and Beans where we each had a soy milk chai latte and a goat cheese with chives omelet which came to €16 in total.

This was a boating holiday for the most part. My other half is a master mariner and an avid boater. He had pre-booked a charter boat from a place called – Yacht Charters Urk. Although we have a good few boating holidays under our belts, this one was special. This boat was a Dutch steel motor cruiser. My other half has designs on one for us one day. Two things struck me about our boating time in The Netherlands. Firstly, how different the countryside is from previous boating holidays in Europe. The Dutch canals are wide, busy, commercial and a lot more modern for the most part. Big working barges barrel along the canals. This is in contrast to the narrow canals and olde worlde scenery we encountered in the UK and France. There, one only encounters leisure boats.

The thing that my brain had a hard time dealing with is the logistics of a country that lies 5 metres below sea level. Everything works the wrong way around. Usually a boat “locks up” when one goes inland. In Holland, one “locks down”. Locks are the waterway equivalent of an elevator or stairs. Boats can’t go up and down slopes so they move through locks to go up or down in stages. Normally water runs toward the sea. But in Holland, well it’s different. For more on locks, boating and waterways visit Waterway Wanderer.

The next day we took the train from Amsterdam Centraal to Lelystadt to be met by the charter company rep. The trip was 45 minutes and give or take 45 kilometres. The train ticket cost €9.00 each. A big plus with doing a charter boat holiday is your accommodation and your transport are one cost. This particular charter cost €1250.00 per week. 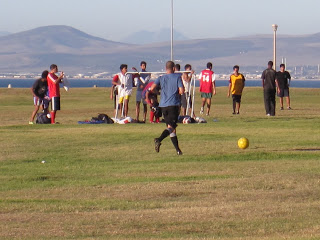 The fixtures for 2010 Soccer World Cup to be played at Cape Town stadium, formerly known as Green Point stadium are:-

I do sometimes wish they wouldn’t change place names so regularly in South Africa. These days I can’t be sure I know the places being talked about because there are so many new names. You need a new map or you could find the old place names don’t correspond to the current road signs. Fortunately it’s less of a problem in the Western Cape Province.